Battlefield 3 is a First-Person Shooter (FPS) that is designed to attack your senses, delivering a visceral combat experience like no other FPS before it. Sequel to 2005's Battlefield 2, Battlefield 3 utilizes the updated Frostbite 2 game engine, which allows for advanced destruction, sound, and graphics as well as a focus on dense in-game urban settings. Additional game features include: classic Battlefield mission-based gameplay, an impressive array of vehicles including jets and tanks, large-scale maps, an updated soldier class, 2-24 player support online and more. 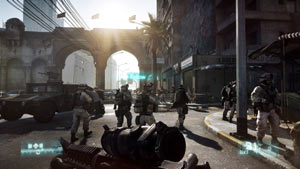 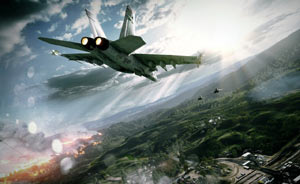 Return to the Battlefield

Battlefield 3 leaps ahead of the competition with the power of Frostbite 2, the next installment of game developer Dice's cutting-edge game engine. This state-of-the-art technology is the foundation on which Battlefield 3 is built, delivering superior visual quality, a grand sense of scale, massive destruction, dynamic audio and incredibly lifelike character animations. As bullets whiz by, walls crumble, and explosions throw you to the ground - the battlefield feels more alive and interactive than ever before.

Back To Karkand Expansion Pack - Now Available for Download

Back to Karkand is a massive themed expansion pack for Battlefield 3 and is now available for download on Xbox Live, PlayStation Network, and PC Download. It features four of the most loved Battlefield maps ever, boldly reimagined with the power of the Frostbite 2 engine. It also gives you new weapons, vehicles, dog tags, and persistence in the form of all-new "assignments" to carry out on the battlefield. The maps included are Strike at Karkand, Gulf of Oman, Sharqi Peninsula, and Wake Island. All have been redesigned from Battlefield 2 as a return years later, changing the scenery and adding the powerful destruction that Frostbite 2 brings to the game. Please note that this expansion pack does not come with the game. It must be purchased separately.